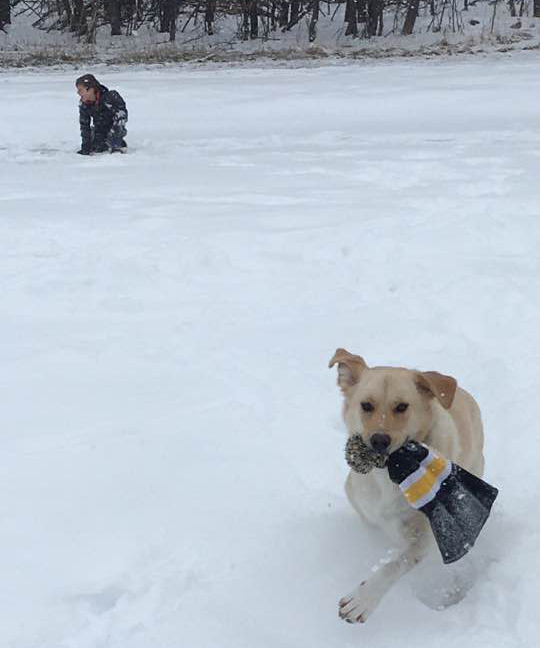 Luna came to RRAEC back in December of 2017 after being attacked by two other dogs. She had several lacerations, bite wounds, and a severe degloving wound on her leg. Degloving occurs when a large amount of skin is torn away, leaving underlying tissue exposed. The damage to Luna’s limb was so severe that the doctor could not close it completely. Her family was given two options; 1. Try to save the leg, which would require a splint, bandage changes, multiple sedations, and potentially amputating later if unsuccessful. 2. Amputate the leg to save her a longer recovery time and potentially prevent amputation later on.

Despite the odds, Luna’s owners decided they wanted to try to save her leg. This involved keeping a splint on her leg and changing her bandage every day. Luna was so painful that at the beginning of her treatments, she had to be sedated during every bandage change. After several bandage changes at both RRAEC and her day veterinarian, Luna’s leg began to heal. She still needed her bandage changed frequently, but the time between bandage changes became longer and longer. Luna’s prognosis began to improve and she started to do much better with the bandage changes.

Eventually, Luna no longer needed to be sedated for bandage changes. After several weeks of continuing this process, Luna did not need her splint, just needed a bandage to help protect the remainder of the wound.

Now, Luna is finished up with bandage changes and treatments. She has recovered extremely well with her family. Luna has been enjoying snagging hats from her human siblings and going on long runs with her mom.