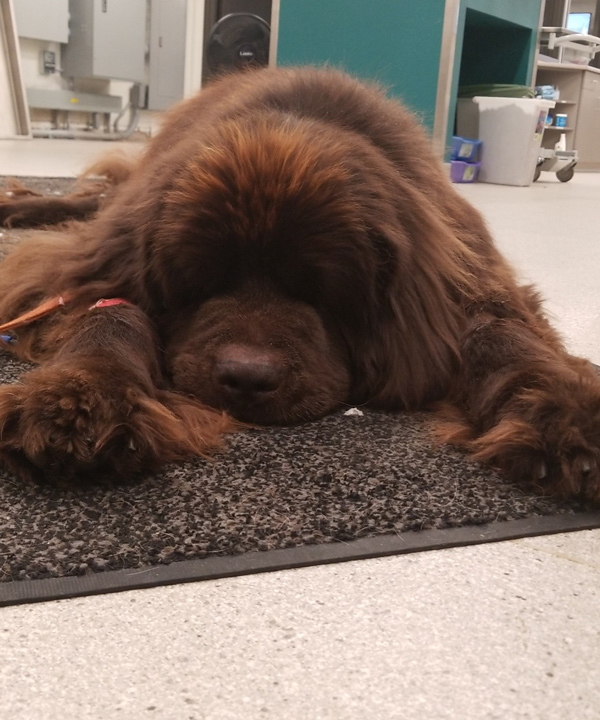 Moose came to RRAEH in December of 2018 for vomiting, diarrhea, and a fever after eating some carpet at home. After taking abdominal radiographs, it was concluded that there was potentially some foreign material in his intestinal tract. Moose had two options at this point. Option 1 was to go in immediately for exploratory surgery and option 2 was to give IV fluids (since he was so dehydrated) in attempt to help the foreign material pass on its own. After discussing with his family, it was decided to go with option 2 – IV Fluids and Rechecking radiographs after 8-10 hours.

After 8 hours of fluids and rechecking radiographs, there was no improvement. Moose needed surgery. While in surgery, the doctor found a large amount of carpet material lodged within his stomach and intestinal tract. After removing the carpet, the doctor had to remove 2 ½ feet of his intestine due to the area being extremely damaged. After surgery, Moose still seemed uncomfortable, would not eat, and would not walk. He needed a lot of pain medication and a urinary catheter since he was not able to stand to go outside. In addition to those treatments, he needed a feeding tube to supply him with nutrients since he did not want to eat.

Three days post-surgery, Moose was still hospitalized and finally able to get up to sling walk with much effort from the RRAEH staff. Over the next few days, he slowly began to walk and eat on his own and eventually was able to have his urinary catheter and his feeding tube removed! After nearly 7 days in the hospital, Moose was able to go home. He has now made a full recovery and is doing well at home with his family. Moose spends his time cuddling with his human siblings, stealing snacks, going on walks, and playing in the snow (even when he gets stuck and his people need to help him).

Fun Fact: Moose was 150 pounds and too large to fit into most of our non heated kennels so he spent a majority of his time at RRAEH on a homemade bed on the treatment area floor alongside the staff.